Panama, a travel destination that always gets overlooked because of Costa Rica. Mr. “Popular”, sitting right next door.

But when it came down to having only days to travel, it was the smaller country that won the Central America coin toss. Sorry Costa Rica, next time!

As I sat in LAX eating breakfast and already missing my adorable looking convict,  I did my norm and bugged whoever was unfortunate to get stuck next to me.  To my left was a man crying on his phone (no thanks) and to my right were a group of girls slurping down mimosas like there was a crackerjack prize at the bottom of the glass.

” Panama for a 5-day little getaway”

“Ohhh you must be going for Cinco de Mayo, right?” -They ask.

Gulp. Puts finger fake gun to the side of head and BOOM.

At that very moment, I could not be more thrilled to get the heck out of America.

The only direct flight (cheap) to Panama was through Copa Airlines.  The ride was easy but the in-flight entertainment lacked big time. We are talking movies from 2016 and old Big Bang episodes from 2010.  On the bright side, the male flight attendant was super hot,  so I ended up getting the entertainment I needed 🙂

As a matter of fact, the entire plane was filled with good looking guys.

Was I on some plane for models? I must be.

Aw, well maybe not since I got sat next to two older ladies who did not speak English and smelled of rusty mothballs.

For the first day, I booked a tour of the canal, jungle hike and native village to start my trip off with a bang!

We began the day on a small boat going through the canal as our tour guide explained everything!!! Everything? Yes. He did not stop talking for the whole 45-minutes we were cruising through the canal. Apparently, this canal thing is kinda a big deal? 🙂

He covered the importance of this waterway that connects the Pacific with the Atlantic, the engineering of the canal locks and of course, there is always something about those Nazis! Between all his knowledge and my random ass questions, I was a certified Panama expert by the time we arrived at our first stop.

Monkey Island is an island filled with no other than…. wait for it…. monkeys! The first set of these jumpy creatures we encountered looked like they belonged in a punk band. They were rocking cool looking mohawks on their heads and screaming anarchy!!! Well, not exactly.

The other species of monkey you know as Marcel from the tv show F.R.I.E.N.D.S. Or if you are a Debbie Downer, that monkey that killed everyone in the movie Outbreak.

Both monkeys reached into our hands to grab the nuts we were so kindly offering. They were not shy to climb on the boat or even on our heads for that matter.  I didn’t care what they did just as long as they didn’t pee on me like when I was in Bali!

After another 45-minute boat ride, we arrived at Emberá Village.  This place was deep in the rainforest where indigenous Panamanians currently still live.  They had no electricity,  no iPhones, no concept of dating on Tinder!!!!
Where do I sign up?

The Embera people live their life in their traditional tribe, with the obvious exception of visitors. We hiked around the village until I slipped and fell and gave the whole village a laugh so hard they most likely peed their skirts. The women graciously offered me a change of clothes that I wore proudly.

Even though it made it quite obvious which boob I recently breastfed from.

The next day was all about the beach, playing in the water and exploring more new islands!

Taboga Island is off the west coast of Panama, and where I planned my next day of mischief. It started with a nice cruise over to the island where I made friends with a mother-daughter travel team visiting from Costa Rica. We chatted about our travels, while I provided horrible relationship advice (as expected), and admired the beautiful Panamanian skyline.

We arrived at Taboga and went for a swim in the inviting warm water. I played with the abundance of local kids on the beach and threw them in the water. Every kid loves a good dunk, right! 🙂

Given an hour to explore,  we were on the hunt for some nice views, a coconut drink and hot boys.  Mostly me for that last part…

We walked into the  San Pedro church that just literally took our breath away. Apparently, it is supposed to be the 2nd oldest church in the Western Hemisphere?? 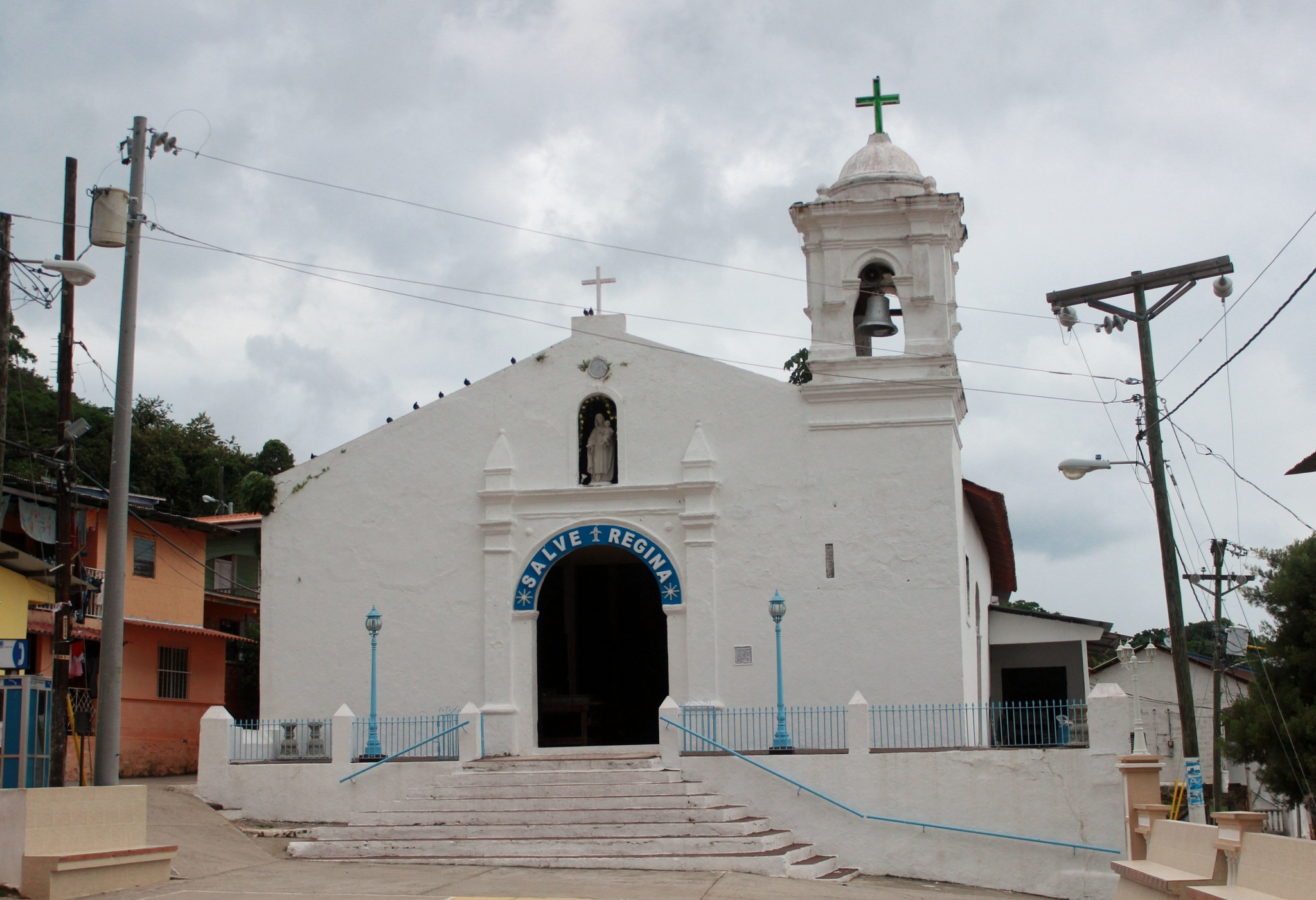 It looked old. It smelled old. So yeah, I believe it!

Before we knew it, it was time to head back so I grabbed a local hunk with a beer, placed the view and requested a picture.  He really had no choice in the matter.

When it comes to making new friends and checking out new nightlife, only one word comes to mind…

I arrived at a “poshy” bar in Casco Viejo to meet up with the best bar crawl in the city. After facetiming with my family moments before, I ended up being an hour late with my new skirt untieing as I walked in. Obviously, I was totally put together 😉

The ten of us played games to get to know each other, took shots to make the game easier, and then danced because well, duh we had shots! Half of the fellow partiers were locals and the others from nearby countries, but all ready to have a fun night!

We went from a cool underground bar to a cool rooftop bar, then finally to a club.  It was when we arrived at the club that the organizer asked if I felt like ditching the crawl and going with her to a drag show.

So we headed off to the other side of town to a bar that was straight upstairs and gay downstairs, which was perfect for when I encountered a douchebag! We mingled with all the amazing queens before they went on stage for one heck of a performance!  I was there with new friends dancing and talking until 5 am.

Yeah, so the morning I went to bed at 6am is the same morning I was supposed to be on a van at 6:30am on the way to Panama’s Caribbean islands to see some of their best beaches.  It is safe to say I literally missed the boat.

After already wasting half the day in bed, I called down to my driver to let him know he was mine for the day and to prepare for so… soooo much fun. When I arrived at his car with my selfie stick and a face covered in leftover makeup from the night before, he just looked at me like…

Crap… is it too late to call in sick?

First stop was the  Biomuseo to check out the science side of Panama.  It was everything from the first people of Panama to how the oceans divided. It was room after room of all types of life that exists in Panama. Even the really creepy stuff at the bottom of the sea, you know, all of God’s mess ups 😉

Regrettably, we didn’t get the opportunity to explore all the exhibits because we arrived right before it was closing, so we did what anyone would do and took some picture perfect selfies with my cool stick.

I told him to surprise me with where we are going next. Yeah …Horrible… horrible idea.

He drove me to all of the “American Touristy” spots that popped up on our ride back. The Hard Rock… The Hooters… The Trump Towers…

Annoyed as hell I yelled,

He gave me a look  I will never forget like I was crazy for wanting to see the real Panama and not a high rise American owned property selling fake Panamanian hats.

After much resistance, he drove me about an hour inland before we officially arrived in his “hood”. This “hood” as he kept referring it to, looked like every normal hood…you know, that you associate with a drive-by shooting.

Random guys in groups standing at the corners of streets, run-down buildings with plenty of corruption, and escorts.

He escorted me into a corner bar filled with 50 middle aged men watching the football. You could have easily heard a pin drop when we walked in, the place went that quiet when I ordered a beer.  It took the bartender at least 2 minutes before serving us our beer but the crowd still ignored their intense soccer and just stared at me. I got my beer and yelled goallllllllllll.. so they would stop looking at me.

And it worked! But there was no goal, so now they were plotting my murder.

For my final day in Panama,  I decided to just see where the wind would take me. And believe it or not, it took me straight to the casino! Who would have thought 😉

Being my last day it is safe to say I was low on funds. so after a quick game of blackjack and a couple dings at the slot machine, it was time to accept I wasn’t going to become rich at this time and move on with my day.

I walked down the street checking out little shops, keeping in mind my niece would never forgive me if I didn’t come home with something for her. There was beautiful architecture everywhere in the old town. History within every wall and every statue. 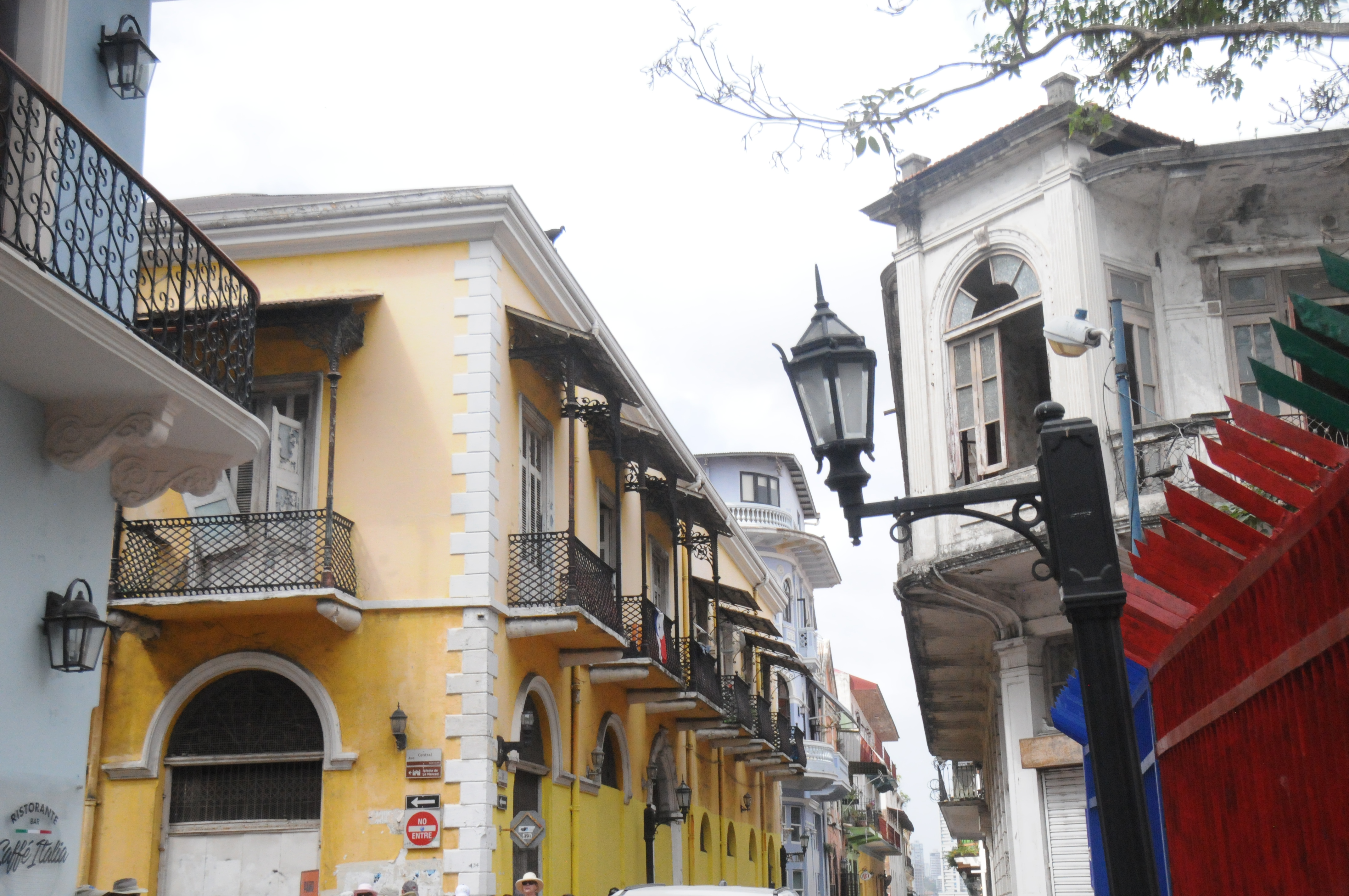 I bought some bracelets and real coffee from a random shop before getting distracted by a man speaking German with the shop worker. The retail manager spoke back in only Spanish, so obviously, that was my cue to jump in.  I leveraged one of the ten sentences I know in German and waited to see what problem I probably just created.

Mystery man responded by paying the shopman for my items and showing me to his SUV to chat further about his time in Germany. He told stories about his past and living in over 10 different countries while working for the Panamanian government.

And he showed me… was real. ..The bulletproof car was real. His gun was real.

My eyelashes from last night.. erm.. not so much.

He drove me to a part of the city I haven’t seen to experience authentic food, and for the first time, be completely engrossed in a meaningful conversation about his country I would have never known otherwise.

Though I never made it out to the other side of Panama, the parts of the country I did experience were beyond my expectations. From mingling with refugees… to starting a dance party on a boat…. to getting kicked out of a club for requesting Despacito too many times… to learning about the unique, loooong, history of the Panama canal.

Panama over delivered in my one wonderful week!

So stop wasting time and go to Panama!